We have arrived!  In Panama, at least :).  The rainy season is in full swing, although I guess October will have the heaviest rains.  It’s been cooler in Panama City, mid-80s or so.  We haven’t been out much yet so I think I will catch up on the last couple of weeks.  I haven’t had a chance to even open my laptop much less write anything.  We hope to start house hunting on Monday.  I will be definitely letting you know what we find out there.

Thanks to all who responded to the blog and on Facebook.  Our time in San Antonio was rather short, but we had a great time.

Susan, we LOVED Guenther’s and strongly suggest to anyone visiting, stop in and have a cinnamon roll.  Oh my goodness!  We thought we had the best in Morgan Hill at Donuts & Things.  But I have never had a cinnamon roll anywhere that was this good.  It was late morning so we split the roll and a club sandwich.  Amazingly delicious! 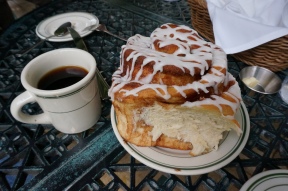 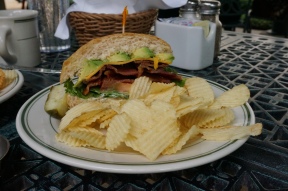 My half of the sandwich. Super yum and homemade roll, too!

Guy, the history nerd, really wanted to see the Alamo.  I enjoy sights, museums and all but rarely know a ton about them.  I was pleasantly surprised by the set up at the Alamo. A ton of information and names but the layout helped me to understand the sequence of events that surrounded the ill-fated and historic battle that occurred there.

We purchased the audio tour ($7 each) and had a pleasant walk around the premises while hearing brief recordings.  Well worth the money, especially since I never really read up on these things ahead of time.  For example, I never knew that Texas was a nation, albeit for a short time.  Guy was a little unhappy that the actual buildings were mostly gone and that the south wall was now an imaginary line in the middle of the street.  But overall it’s worth the time to check out.

Interesting contrast of the historic Alamo being towered over by modern hotels.

This cool memorial is out front and has the names of those that died at the Alamo carved into it.

At the bottom left of the base is reportedly an indentation from a cannon ball.

The next day we went to check out the River Walk.  Everyone’s told us that we have to go and see it.  I just figured it was a cool outdoor-type mall.  Well, it’s definitely outdoors and it’s definitely cool, but nothing I thought it would be.  We took the 40 minute boat tour ($8 each) and got a short history and points of interest tour from the comfort of the boat.  I think if we just walked all the way around it would’ve taken us all day.  Especially if we stopped for a beer or margarita at all the bars :)! 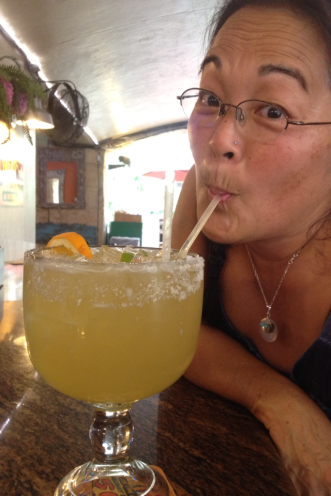 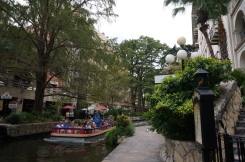 A whole different world just feet below the street level of the city. 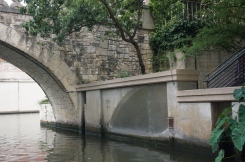 One of the water control flow gates 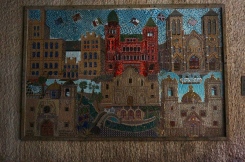 A cool tile mosaic on the wall of the Hyatt Regency 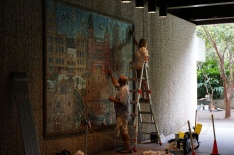 This gives perspective on the size of the mosaic. They are cleaning and repairing it.

A waiter at Dick’s Last Resort 😉 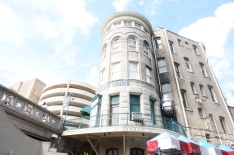 The River Walk was really an amazing place.  I thought it was a fairly recent addition, but it’s been around for some time.  It was really cool to be just feet from the main roads, but never really heard traffic.  We felt like we were in a different time & place.  We only got to visit for a couple of hours so I think we’ll be back to wander around more.

We got a quick visit in to Denver to see Guy’s sister, Kim, and her family.  We stayed with Kim & David and even got in part of the Broncos vs Raiders game.  It was so nice to see the nephews & nieces:  Christopher, Kelli, Michelle & Aubrey and Chris, Alicia, Alexis and Ryder.  Got to celebrate with Ryder for his #2 birthday.  The trip, though short, was great! 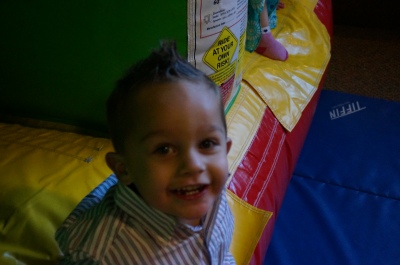 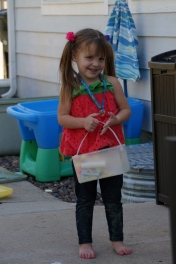 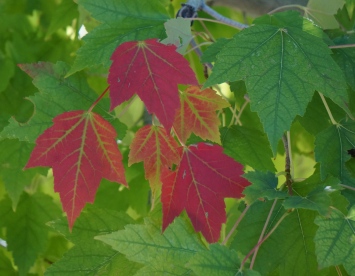 The leaves were just beginning to turn in CO

Alexis helping Ryder open his present….Ziplocs?!! What’s up with that Auntie Kelly! 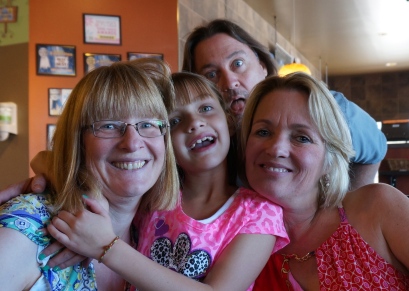 SAYING GOODBYE TO TEXAS AND THE USA!

Leaving Texas was so very exciting yet a bit sad.  We really loved staying with Ray & Denniece and meeting and hanging with Krystopher, Chevella, Ashley & Cami and DeJuan, Krystal & Carter and John & Gail.  Such wonderful people that have become like family.  Their open hearts were so warm and welcoming.  We will miss them so much!

Here are a few things that we saw in Texas.  I do realize that they are probably in other parts of the US but I first saw them in Texas.  I missed a few pics that I had wanted to show (like Shipley’s Donuts and the Second Baptist Church) but then again, I didn’t see all of Texas either ;). 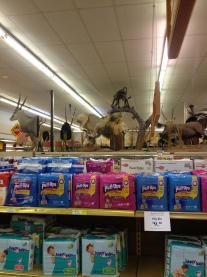 Archie’s Grocery in Splendora had TONS of mounted game animals.

We loved the weather here. Warm weather with thunderstorms. 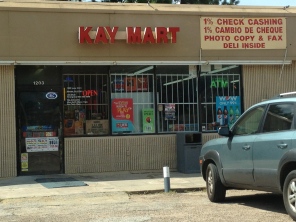 All the gas stations had stores and/or restaurants not just the mini marts. This one had a department store. 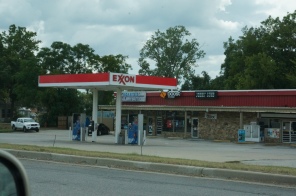 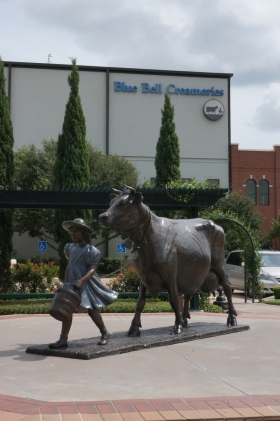 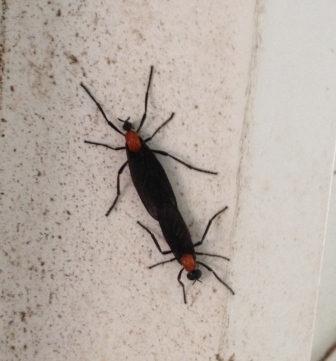 These are love bugs. They swarmed for most of September. The female is the larger one and is about 1/2″. I rarely saw them unconnected. 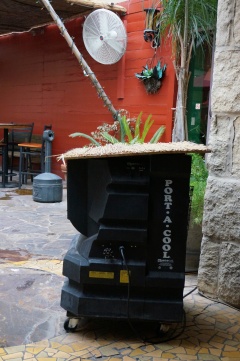 Instead of the standard outdoor heaters, fans and outdoor AC are common.

There are no mountain ranges, which makes the sky seem humongous. The clouds are beautiful and seem to go on forever. 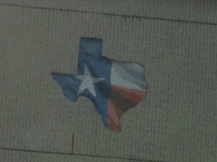 Texans are proud of Texas. This was on a freeway wall. 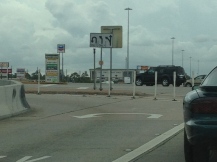 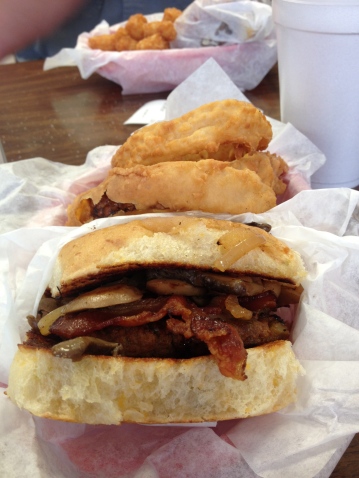 I had the Meatloaf with bacon & mushrooms at Burger Fresh. The jalapeño buns are made locally and are awesome. 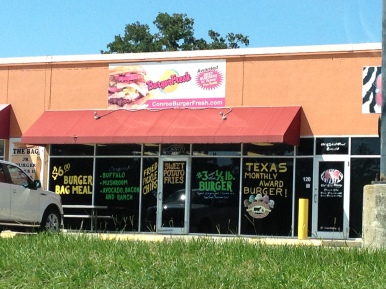 Burger Fresh is in Conroe and is a must have if you are ever in the area. Fabulous burgers.

These are rare in Texas.

Our last breakfast in Texas at 105 Cafè in Conroe. This is the Cowboy Skillet. Yummy! 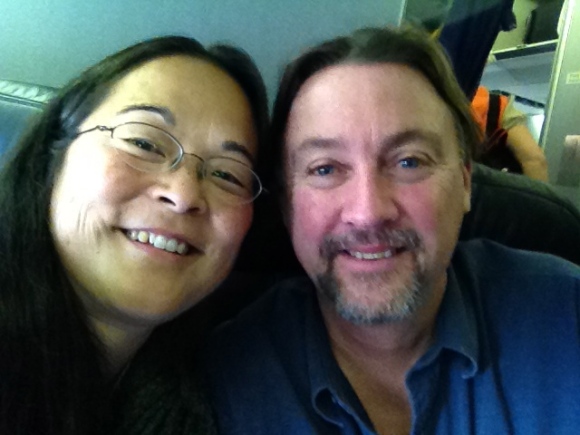 Our last photo in the USA, waiting for our plane to take off.