About a year before we got here, I signed up for a Boquete email newsletter.  It’s primarily used by expats and anyone can post about events and such to let the community know what was upcoming.  It’s a nice way to find out what’s going on in the Boquete expat world.

One such notice was from the Boquete Birders Group for a birdwatching hike open to anyone, newcomers and experienced alike.  Boquete is known for its birds and it was going to be an easy going walk around the side roads in town.  I think birds are cool and I can always use practice taking pictures.  So Guy & I decided to go.

There was a group of about 15 people, most armed with binoculars or a camera or both.  Some were very experienced birders.  A few, like us, were first timers out to see what this was all about.  There were even a couple of people who were not too interested in birds, but came along to hang out with their spouses, chat with others and get in a really nice walk.

I was really surprised by the fact that we were never more than 2 streets away from the main drag.  Just slowing down and looking around can often reveal just how much there is hiding in plain sight.

I brought my trusty camera and took tons of photos.  There are almost 1000 species of birds in Panama.  No worries, I didn’t include that many pics.  But we saw lots of birds, which, I found out, are difficult to photograph.  The little ones especially are so full of energy that even sitting still on a wire, they seem to be constantly moving.  Most of my shots came out blurry.  Of course, my being a beginning amateur photographer is probably the biggest part of the problem.

I included the following bird pics, even the ones with imperfections, to show some of the variety and color that we got to see.

Bay-headed Tanager: his head is hiding by the berries. 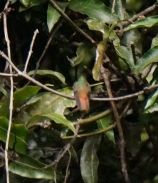 Back of rufous-tailed hummingbird

My friend, Bonnie, told me that this guy, a rock pigeon, is always hanging out on this window of the library.

I think this is a black vulture. Lighting is poor but I’ve never seen a vulture like this and his silhouette is cool.

Not a wild bird, but was told it’s an expensive fighting cock. He was leashed to the front yard.

I am still constantly amazed by the beauty that we are surrounded by here.  I love that just by relaxing my pace, letting go of any stressful thoughts and looking around instead of just down, the world begins to open up and reveal itself.  These pictures show much of the flora that we saw on our walk. 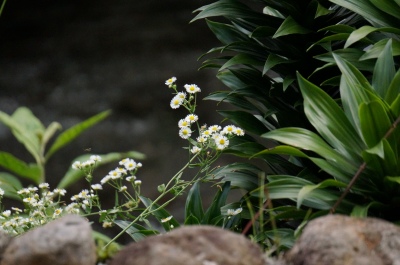 Blossom and fruit of a red banana

Amazingly, there are cacti here in Panama. This group is at least 30′ tall. 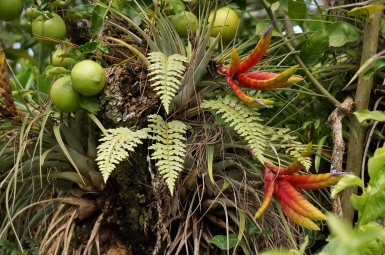 I’m always finding these interesting groupings of plants. This is a lime tree with a fern and tillandsia growing right on it.

Such beautiful settings for neighborhoods.

Tillandsia grows on other plants and are everywhere here.

I really love the intense color of bougainvillea.

Another interesting combo…banana tree and poinsettia. 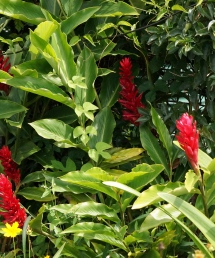 There is so much to observe around the town when we take the time to see it.  I had a lot of fun with my camera :).

This is one of the few wooden structures in the area. Often poetry and artwork are done on these buildings.

Guy saw this critter and at first we thought it was a monkey. It had an amazingly long tail. Turns out it’s a squirrel.

The artwork is fun and caught my eye. Funnyish story…this is Amigo’s Restaurant, a big expat hangout. Just heard that the owners just fled to the States from Panama….hhhmmmm……… 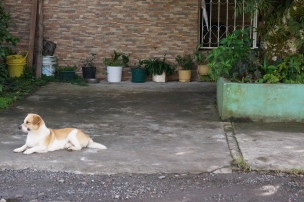 Not sure if this pup belongs to this house or not, but he photos well.

A simple path to who knows where 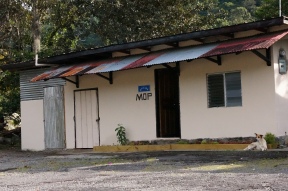 The MOP is apparently the road workers, similar to California’s Caltrans.

Even with the old buildings, smoking truck and wires everywhere, the mountains are so beautiful. 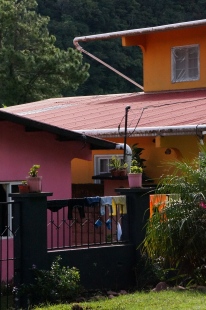 A lot of homes have bright colors and they all have gorgeous views.

A common basilisk, aka Jesus Christ lizard (it can run on the surface of water) sunning himself.

Often we see rocks as boundaries, walls and such. Many times they are painted.

It was a beautiful day for a walk.  We got to meet nice people, see so much and get in some exercise to boot.  Fun times!