We have the very best landlords possible.  Jonathan and Melissa are a young couple that own our apartment complex.  They have been super accommodating and are just the best.  When we’ve had any issues, they’ve dealt with them promptly.  They have made adjusting to Panama so much easier.

Guy chats with Jonathan about hunting, fishing, Panama…whatever comes up.  During one of these conversations, Guy asked Jonathan about beaches and diving.  As they were talking, Jonathan offered to take us out for fishing or diving or just boating around to see what is out on the coast.  All for just the cost of the fuel.

What a deal!  We took Jonathan up on his offer and his first free day, we headed out at 6 a.m.  We drove for about an hour to Boca Chica, a coastal town, where his boat is stored. Carlos, the marina owner, is Colombian and speaks excellent English.  He launched the boat using a tractor to take the boat down the ramp.  We boarded the boat and were off on our mini cruise by 8 a.m.

It was such a gorgeous day!  Blue skies, huge, cottony clouds and blue, blue Pacific Ocean.

Clear and blue sky and water as we head out from the launch.

Guy driving while Jonathan sets up the poles. 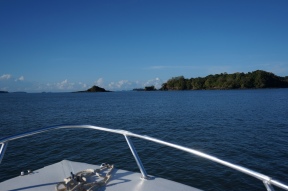 Heading out to the ocean

It took us about an hour to get to our destination, Islas Secas, a group of islands southeast of Boquete in the Gulf of Chiriqui.  I think that the only place there are people living is on the largest island.  This island is private and has a cool looking resort, the Islas Secas Resort.  The resort has 7 casitas that are styled after yurts (used by various Asian nomadic peoples.)  From the water it looks like a place I’d love to stay at.  But I’ll have to save up some dinero first.

You can really only see the white roofs, but these are the yurts.

This is one of the water taxis. I believe that you can also access the island via a small plane, as they have an airstrip.

Jonathan’s set up was 4 poles in the water as we trolled around the islands.  At first he was a little disappointed at how many fish we got.  But once we figured out that we averaged over a fish an hour, we all were pretty pleased.  Especially since most people that we heard over the radio weren’t catching anything.  We caught 4 needle fish, 2 bonito, 1 barracuda, 1 mackerel and 1 rainbow runner.

I mostly took pics, but I caught one. Another needle fish. Check out the blue teeth!

A needle fish. One of the first fish we caught, but not the biggest.

Barracuda…my what crazy teeth you have!

Sierra Mackerel, one of Guy’s favorite fish to eat.

Bringing in the big one. 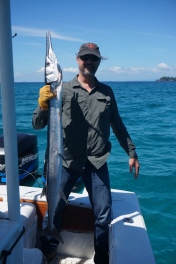 This is the largest catch of the day. Almost as tall as Guy 🙂

The fishing was fun and so was just being on the boat.  But the highlight of the day was the dolphins.  Heading out to the islands we saw a few.  Later in the morning though, we were cruising along and had a huge pod of dolphin join us for a race across the ocean.  It was soooooo cool!

This guy was always right in front or to the side of the boat.

Check out this video Guy was able to make with his iPhone.  At about 14 seconds in you can see a pair jumping together.  It’s a mom and baby.  It was  awesome!

A bit later Guy wanted to go swimming.  We had forgotten our snorkeling gear (we’ll never make that mistake again!!!) but Jonathan had a spare mask on board.  So we found a shallow area safe to anchor the boat and Guy jumped in.  Earlier in the day the beach was several feet deep.  By the time Guy went swimming, the beach was almost gone with the tide.  He saw many very cool underwater fish and took pics with his Lifeproof-covered iPhone.  But unfortunately the Lifeproof cover failed and the pictures didn’t turn out.  Oh, the iPhone and cover are going back to Lifeproof for replacement.  Brand new phone and cover.

Here are the beaches earlier in the day.

The water was really clear and so turquoise. 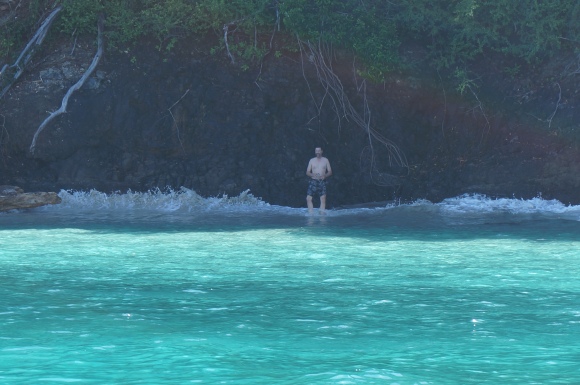 Here’s Guy on what remains of the beach.

In the shelter of a couple of the islands that we circled as we trolled were 4 or 5 shrimping boats.  It was a holiday so they may have been taking a few hours off to celebrate.  I loved how they looked against the islands.  Reminded me of a pirate movie.

All the boats had birds over all the ropes & wires.

I love being out on the ocean and I love boats.  The water was so deep blue and there was just enough wind to make the water interesting and yet not rock the boat too much.  And the islands were beautiful.  The wild beauty of nature that you know will never be conquered by man.  These pictures just don’t do it justice but I hope that you can at least get a sense of the awe and even peace that I felt. 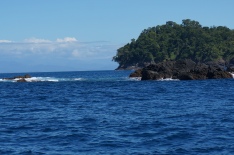 One of the islands has this blow hole. The spray can be much higher when the current is greater.

Because of rocks, not sure we could approach. But wouldn’t it be fun to explore the cave?!

The sun beginning to set behind the clouds creates a dramatic backdrop.

As we headed in the seas were rougher as the wind was picking up.  It was a bit rough but exhilarating at the same time.  But I was glad when we hit the marina area and slowed down coming in.  It was almost dark when we finally docked.

Jonathan pays $60 extra each time he takes the boat out.  This includes the launch, bringing the boat out, cleaning the boat, cleaning the fish and filling the fuel tank as well.  Our total for the day, including gas, fish and everything was $200 total. Not bad for a full day of fishing, cleaned and bagged fish and nothing else to do but get in the truck and go home.

This is one of 2 workers cleaning fish. Behind him you can see the tractor pulling the boat up. On the ground is the biggest needle fish waiting for his turn.

This has nothing to do with fishing but it’s definitely part of being in Panama:

A whole herd of cows heading down the road to who knows where.  At the head and end of the pack were several vaqueros.  The cows seemed really focused on getting somewhere else so they didn’t really mind us.  We simply passed slowly on the left.

We didn’t cook any fish until the next day as we didn’t get home until after 9 p.m.  But we cooked up some mackerel and a chunk of the large needle fish.  Both of them tasted amazing and I, the non-eater of anything fish, loved it.  But I really wanted you to see these pictures.  The needle fish bones, when cooked turned blue!  So easy to pick out the bones. 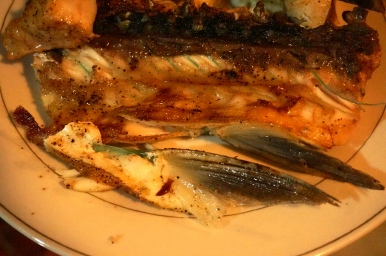 Here’s a close up. The blue lines are not veins but bones.

A plate full of mackerel steaks on a butterflied chunk of needle fish.

It was hard to believe that this was the real color of the bones! Matches the teeth 🙂

We had a blast and can hardly wait until the next time.  Hopefully we can land a dorado, wahoo or tuna!